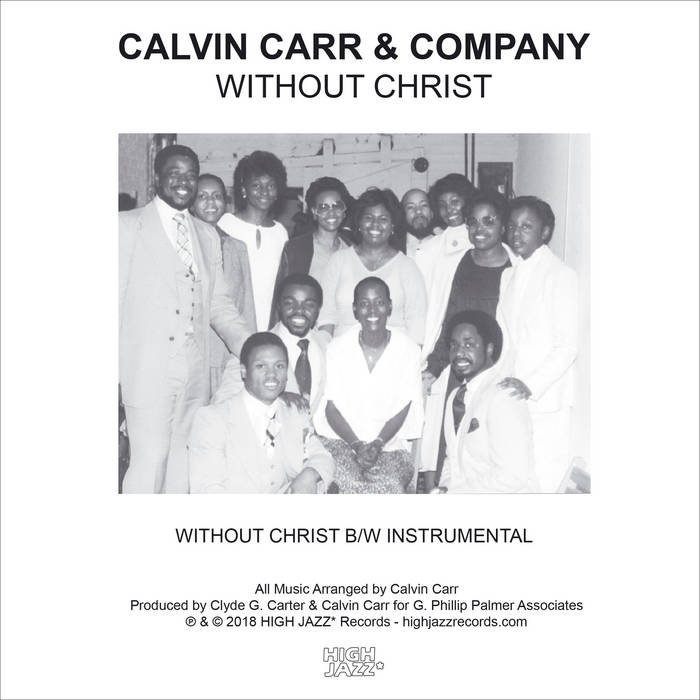 Todd Westendorp Amazing re-issue, amazing work by High Jazz on all of their releases!
Thank you!

Calvin Carr & Company are enriched with sensitivity and alive with the spirit.
The kind of gospel that sweeps all over you and runs through your veins. There is always a sense of inadequacy when attempting to describe just how good something is. Words like exciting, inspiring and original come to mind but as always you will have to decide for yourself.

The sounds of music that shaped his life were the sounds of his early church singing experience. He began playing the piano at the age of 9, continued his work in music throughout high school, composing, singing in different churches, learned how to executive produce and ended up working for the TCS Music Company under the direction of its founder Mr. Tony Carter, displaying the talents of Philadelphia’s local artists such as Gabriel Hardeman Delegation, The Young Delegation, Little Sammy & The Flying Cloud Jrs., Gwen Carter, The Collins Sisters, Brockington Singers…

In 1978 Calvin released the now scarce and relatively unknown “Without Christ” 45 on the TCS “Philadelphia United Records“ subsidiary.

By the end of 1980, Calvin Carr met Andrew Ford and his younger brother and musical genius, Steven Ford and with their partners, horn arranger Leon Frison, drummer Garfield Williams and bassist “Ting” Paul Burke, they formed the “Sweet Rain Records” Company that has produced some of America’s most notable gospel artists such as: Pastor Hezekiah Walker and the Love Fellowship Crusade Choir, Barbara Ward Farmer and the Wagner Alumni Choir, Rev Hubert Powell And The Gospel Truth, The Brockington Ensemble, Southeast Inspirational Choir, The Institutional Radio Choir of Brooklyn, N.Y, Southeast Inspirational Choir of Houston, TX introducing Yolanda Adams and countless others.